The Value(s) of Science. The normative order of African Studies 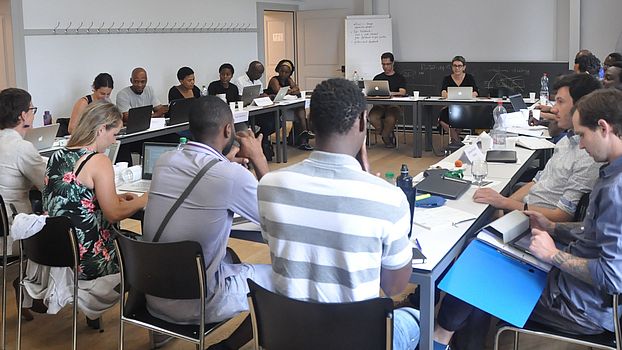 The Basel Summer School in African Studies 2019 addresses the issue of the normative order in African Studies. According to received wisdom, values would appear to play no role in science. At any rate, it is assumed that the role played by values should be a limited one. The epistemological background to this assumption is the perennial distinction between objectivity and neutrality. In this connection, it is argued that proper knowledge production is only possible if researchers and scholars prevent their values and interests from influencing their work. The best way to accomplish this consists in adhering to strict standards of objectivity making the validity of scientific claims a function of methodology and logic, rather than a function of the normative commitments of knowledge producers. Yet, it is fair to argue that debates in the methodology of the social sciences over the past two hundred years have revolved around these assumptions. Debates between opposing fields, i.e. those who claim that science should be value free and those who counter that science is never value free on account of how science has been deployed to pursue the interests of some over others have fired the imagination of those participating in the discussions.

African Studies is a field where this issue is of particular interest. The field came into being as part of the European colonial project. In this sense, knowledge production on and in Africa has always been tied to the political, economic and cultural interests of the nations funding it. Even in our days, when African nations are independent, have their own researchers and seek to produce knowledge themselves, it appears to be the case that values and interests continue to play a role. The requirement, for example, that research is made relevant to policy in the context of development concerns seems to secure a place for the values and interests of dominant nations in that development is a concept conjuring up normative expectations concerning the right way to live. The grand narrative of the Enlightenment bearing on how reason could ensure progress and human improvement lurks beneath the call for policy relevance.

There is a sense in which calls for the decolonization of the African mind are reactions to how Africanist scholars perceive the role of values in science. When African scholars doubt whether scientific knowledge drawing from what they assume to be a “Western” epistemology is able to render African worlds intelligible, they may be expressing a discomfort with the extent to which the knowledge produced might be speaking to a normative order laid down by “European” values. While this may sound ideological, there possibly is a methodological argument behind it. Accounts of the world are as much about concrete phenomena as they are about unspoken aspects of those phenomena. The key finding, for example, that corruption undermines African development is an apt description and explanation of state fragility in Africa. At the same time, however, it suggests that – all things being equal (i.e. global structural conditions) and the history that constituted most African countries as developing nations – without corruption things might look different. Alas, it is clear that no comprehensive understanding of Africa’s development challenges is possible without taking history into account. The ceteris paribus clause does not hold much water, either. The methodological challenge here is that the conceptual categories through which we seek to retrieve the world direct our attention to the data lending them substance when the challenge in fact is to critically engage with the categories themselves.

Engaging with conceptual categories means to uncover their normative foundations. Science is a highly normative enterprise in that its ultimate goal, producing knowledge to render the world intelligible, constitutes a broad commitment to some notion of a better world. Part of the challenge of doing African Studies, therefore, should be a commitment to uncovering the values underlying science not to dispose of them, but to harness them to even better research. The title of the Summer School is cast purposefully in an ambiguous way. On the one hand, it speaks to the fundamental value of science and, on the other hand, to how interests come together to lend legitimacy and purpose to science.

The basic goal of the Summer School is to address this ambivalence by inviting proposals which look into “the value(s) of science” from several angles:

To draw readers to publications or gain access to conferences, writers need to compose attractive abstracts that spark interest in their research. The Advanced Study Skills workshop offers guidance on the content, structure and language conventions of conference and research article abstracts in the social sciences and humanities. At the end of the workshop, participants are expected to have gained independence in writing ready-to-submit abstracts for conferences or journals.

In addition to these core points, issues identified in participants’ own writing may be addressed.

Elísio Macamo, Professor of African Studies at the University of Basel

Ralph Weber, Assistant Professor of European Global Studies at the University of Basel

Stephan Meyer, lecturer for English for academic purposes and Deputy Director of the Language Center of the University of Basel

The summer school is open for PhD students enrolled in Switzerland and abroad.

The fee for participation is CHF 100. It includes snacks and lunch at the course days. Transportation and accommodation is not included.

Participants will be selected on the strength and merits of a two-page application in which they choose one of the key questions listed above and explain how their research relates to it. In addition, applications should include a CV of the applicant.

The deadline for application is extended to 15 August 2019.