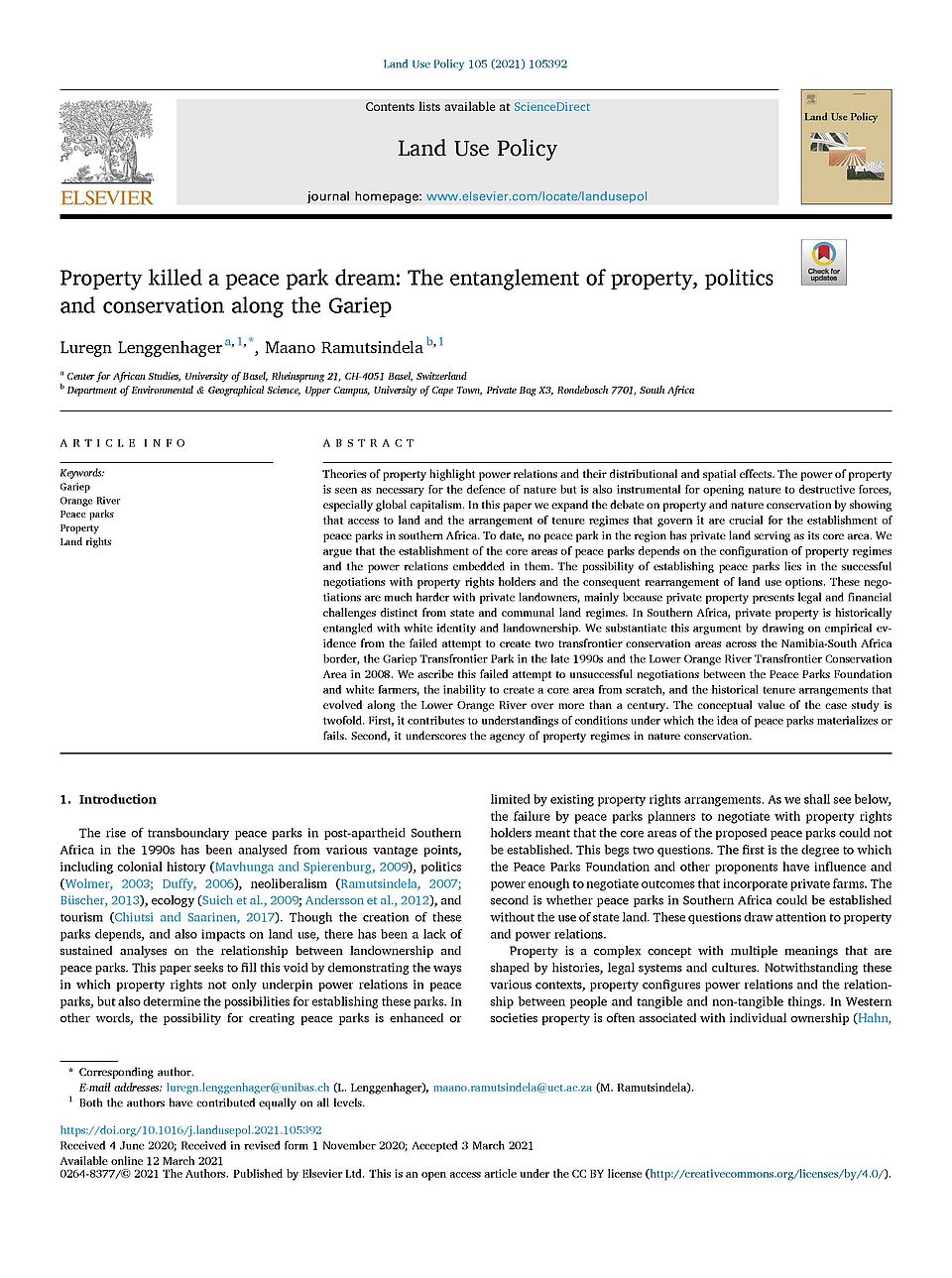 In their article, Luregn Lenggenhager and Maano Ramtsindela examine the role of the configuration of property regimes and the power relations embedded in them for the establishment of peace parks in southern Africa.

Theories of property highlight power relations and their distributional and spatial effects. The power of property is seen as necessary for the defence of nature but is also instrumental for opening nature to destructive forces, especially global capitalism. In this paper we expand the debate on property and nature conservation by showing that access to land and the arrangement of tenure regimes that govern it are crucial for the establishment of peace parks in southern Africa. To date, no peace park in the region has private land serving as its core area. We argue that the establishment of the core areas of peace parks depends on the configuration of property regimes and the power relations embedded in them. The possibility of establishing peace parks lies in the successful negotiations with property rights holders and the consequent rearrangement of land use options. These negotiations are much harder with private landowners, mainly because private property presents legal and financial challenges distinct from state and communal land regimes. In Southern Africa, private property is historically entangled with white identity and landownership. We substantiate this argument by drawing on empirical evidence from the failed attempt to create two transfrontier conservation areas across the Namibia-South Africa border, the Gariep Transfrontier Park in the late 1990s and the Lower Orange River Transfrontier Conservation Area in 2008. We ascribe this failed attempt to unsuccessful negotiations between the Peace Parks Foundation and white farmers, the inability to create a core area from scratch, and the historical tenure arrangements that evolved along the Lower Orange River over more than a century. The conceptual value of the case study is twofold. First, it contributes to understandings of conditions under which the idea of peace parks materializes or fails. Second, it underscores the agency of property regimes in nature conservation.

Lenggenhager, Luregn, and Maano Ramtsindela. “Property Killed a Peace Park Dream: The Entanglement of Property, Politics and Conservation Along the Gariep”. Land Use Policy 105 (2021): 105392.