Publication: Petty corruption in the public sector: A comparative study of three East African countries through a behavioural lens 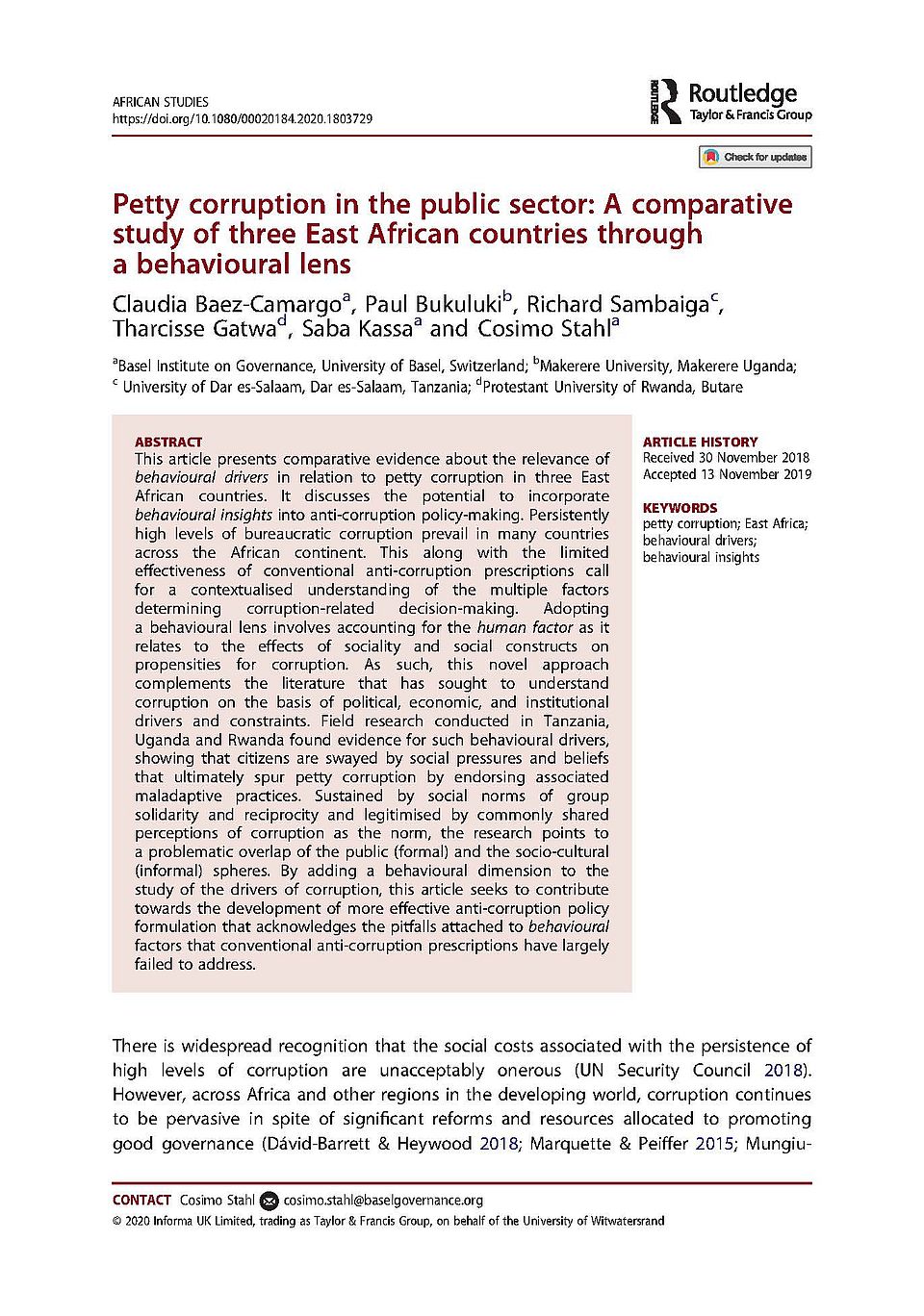 The Article results from a multi-year collaboration between an international team of researchers: Claudia Baez-Camargo, Saba Kassa and Cosimo Stahl of the Basel Institute on Governance plus Paul Bukuluki of Makarere University in Uganda, Richard Sambaiga of the University of Dar es-Salaam in Tanzania and Tharcisse Gatwa of the Protestant University of Rwanda.

The article presents comparative evidence about the relevance of behavioural drivers in relation to petty corruption in three East African countries. It discusses the potential to incorporate behavioural insights into anti-corruption policy-making.

Persistently high levels of bureaucratic corruption prevail in many countries across the African continent. This, along with the limited effectiveness of conventional anti-corruption prescriptions, calls for a contextualised understanding of the multiple factors determining corruption-related decision-making.

Adopting a behavioural lens involves accounting for the human factor as it relates to the effects of sociality and social constructs on propensities for corruption. As such, this novel approach complements the literature that has sought to understand corruption on the basis of political, economic, and institutional drivers and constraints.

Field research conducted in Tanzania, Uganda and Rwanda found evidence for such behavioural drivers. It showed that citizens are swayed by social pressures and beliefs that ultimately spur petty corruption by endorsing associated maladaptive practices. These are sustained by social norms of group solidarity and reciprocity and legitimised by commonly shared perceptions of corruption as the norm. The research points to a problematic overlap of the public (formal) and the socio-cultural (informal) spheres.

By adding a behavioural dimension to the study of the drivers of corruption, this article seeks to contribute towards the development of more effective anti-corruption policy formulation - one that acknowledges the pitfalls attached to behavioural factors that conventional anti-corruption prescriptions have largely failed to address.

The research was supported by the UK Department for International Development through the East Africa Research Fund Initiative of the Research for Evidence Division.

Publication: The Weight Women Carry. Research on the Visible and Invisible Baggage in Suitcase Trade between China and Africa