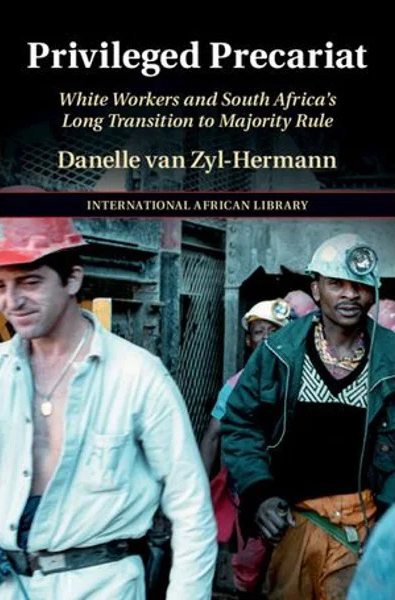 The South African apartheid state’s ethnic and race-based politics pushed an image of whites as classless. Danelle van Zyl-Hermann's book challenges this view. It focuses on the experience of the white industrial workforce and their unique social position in apartheid-era South Africa.

White workers occupied a unique social position in apartheid-era South Africa. Shielded from black labour competition in exchange for support for the white minority regime, their race-based status effectively concealed their class-based vulnerability. Centred on this entanglement of race and class, Privileged Precariat examines how South Africa's white workers experienced the dismantling of the racial state and the establishment of black majority rule. Starting from the 1970s, it shows how apartheid reforms constituted the withdrawal of state support for working-class whiteness, sending workers in search of new ways to safeguard their interests in a rapidly changing world. Danelle van Zyl-Hermann tracks the shifting strategies of the blue-collar Mineworkers' Union, culminating in its reinvention, by the 2010s, as the Solidarity Movement, a social movement appealing to cultural nationalism. Integrating unique historical and ethnographic evidence with global debates, Privileged Precariat offers a chronological and interpretative rethinking of South Africa's recent past and contributes new insights from the Global South to debates on race and class in the era of neoliberalism.