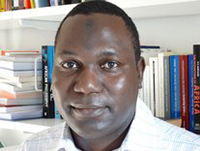 Adama Ousmanou (University of Maroua, Cameroon) specializes in the political, social and religious history of the Chad Basin. He earned his PhD in History at the University of Ngaoundéré in 2012 with a thesis bearing on Islam, Ethnicity and Power in Chad Basin from 1960 to 2000: a comparative study of Cameroon, Chad and Nigeria. In connection with this project he was a visiting fellow at the Centre for African Studies Leiden and at Nagoya University, Japan. In his current research he applies a comparative method and is focusing on issues of inter-religious and inter-ethnic dialogue, peace and traditional methods of conflicts resolution in Chad basin.

Northern Cameroon and Nigeria constituted a broken up territory where religious and ethnic diversities are in a constant change. There are many similarities between Northern Cameroon and Nigeria: economic issues and narrowing opportunities, resource-related conflicts (involving for instance land, territory, and water bodies), unequal access to political power and position among ethnic groups, the feeling of marginalization, issues around appointments into traditional leadership positions, all of which affect relationships between individuals and groups resulting in ever growing deep-seated suspicion and the inability to develop cooperative relationships. Due to overlap of ethnic identities with religion it often, unfortunately, finds expression in religion. In Northern Cameroon, Religion served as an instrument of social harmony. Paradoxically, however, in Northern Nigeria, it served as a motivation for violence. Conflict cannot be replaced; it can be managed. The rise of fundamentalism in Northern Nigeria with sporadic inter-religious clashes had severe repercussions on the region. The Northern Cameroonian model rather managed positively those conflictual factors into something life giving, that is peace and pacific co-existence by peaceful means. The purpose of this study is to critically analyze the incessant inter-religious conflicts in Northern Nigeria, to identify the real causes of such conflicts and to suggest theological and practical Northern Cameroonian model of interreligious dialogue to sustain peace building endeavors, then compare.