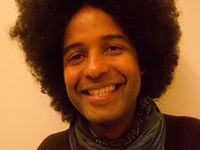 Carlos Fernandes is a Sociologist with a PhD in African and Ethnic Studies from the Federal University of Bahia, Brazil. His doctoral research examines the socio-political conditions of scientific knowledge production in post-independence Mozambique during the "socialist transition" (1975-1990). The case study discussed the Centro de Estudos Africanos (CEA) from Eduardo Mondlane University, Maputo. From 2012 to 2013, he was postdoctoral fellow at the Centre for Humanities Research at the University of the Western Cape in Cape Town.

His current research project explores the connections between social science research, intellectual biographies, colonial modernity, race, revolution and revisionism in `post-socialist` Mozambique. His research interests include the sociology of intellectuals, sociology of knowledge, history of social sciences research institutions, and social conditions of knowledge production in Mozambique. CODESRIA and the journal of Afro-Asia have published his work.

Research Project: Colonial modernity, revolution and revisionism through intellectual biographies: on the possibilities of social sciences in Mozambique today

This research project intends to explore the current state of social sciences research in Mozambique by following and reconstituting the intellectual biographies of four leading Mozambican social scientists: Alexandrino José, Teresa Cruz e Silva, Luís de Brito and Yussuf Adam. The other reason for choosing these scholars for the case-study is related to their – externally imposed - ethnic/racial identities which were profoundly inscribed in the racially structured Portuguese colonial society in Mozambique.

The study intends, firstly, to describe their social and cultural positions as colonial subjects. Secondly, to examine their academic careers, research production and publications. Thirdly, to discuss their social and political life in the post-colonial period. And lastly to examine how these life-stories interacted with each other and the political and social context of colonialism, the anti-colonial struggles, and what possibilities this opened in the post-independence moment (socialist and post-socialist). Generally this research project situates contemporary Mozambican social sciences research within the colonial context to provide a broader understanding of how social scientists, their scholarship and academic disciplines have been constituted and established in Mozambique today. The study attempts to move beyond ‘canonical’ Mozambican historiography, which writes Mozambican colonial history focusing on its exclusionary discourses and practices and, secondly, reads post-colonial scholars and their research production through the concepts of “resistance”, “liberation” and “cultural autonomy.” By contrast, the project proposes a Foucauldian understanding of power in order to grasp the conditions of intellectual possibilities that colonialism produced as well as how, in the  post-independence period, interactions between domination and hegemony have been producing new modes of scholarly inquiry and historiographical revisionist positions.

Through the intellectual trajectories of the four scholars, the study proposes to tackle three distinct issues. Firstly, to examine how colonialism, although generative of “tragedy” due to its fundamental contradictions, constituted the conditions of possibility for action and imagination of the (anti-)colonial subject (D. Scott). Secondly, it characterizes the post-independence context of the internacionalismo and leftist Mozambican social sciences scholarship, taking as its main feature, the deployment of the narrative of the “anti-colonial romance” and the paradigm of Marxist political economy. Thirdly, it examines how the post-independence period of the expiry of the “third world dreams of decolonization” and the “socialist utopia” have been affecting and shaping social sciences scholarship and its producers. Paraphrasing Reinhart Koselleck, what are then, today, the new “spaces of experience” and the “horizons of expectations”? The study thus situates the life-stories of these scholars within the interstices of different worlds, the colonial and the post-colonial, emphasizing their ambiguities, contradictions and the emancipatory possibilities they opened. It further scrutinizes how these intellectual biographies - which intersect and integrate the colonial and the post-colonial as a coherent whole - can provide insights on the possibilities of social sciences in Mozambique today.