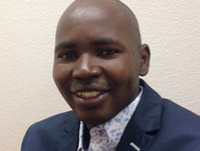 Melchisedek Chetima, senior lecturer in Cultural History at the Université de Maroua in Northern Cameroon, joins the Centre for African Studies on a one year FCS postdoc fellowship. His disciplinary affiliation is with the Department of History (Prof. Julia Tischler). Chetima is a graduate of Ngaundere University of Cameroon and earned his PhD at Laval University in March 2015. He has a particular interest in theories of material culture and materiality, vernacular housing theories, theories of consumption and social identity, servile memory and modernity and with material culture of slavery and colonization. In his research he straddles the disciplines of History, Anthropology, Archaeology and Political Sciences.

Research: Boko Haram, slave raidings and ubiquity of violence at the borders of the Mandara Mountains

His project titled “Boko Haram, slave raidings and ubiquity of violence at the borders of the Mandara Mountains” sets out to analyze the emergence of the Boko Haram sect in Nigeria and factors contributing to its establishment in the Mandara Mountains, a Northern region of Cameroon sharing boundaries with Nigeria. The argument put forth is that Boko Haram is not only one contemporary demonstration of terrorism. It emanates from a historical model which one can trace the origin as from the 15th century in particular with the kingdoms of Kanem and Borno. Chetima’s argues that it is essential to integrate this historical dimension in order to have a clearer picture of the intentions undermining Boko Haram’s present plans to restore sharia.

This idea finds its justifications in at least three solid reasons. Firstly, the historical context of the practice of slavery and the Jihad is significant for Boko Haram. The sect therefore uses this as point of doctrinal and discursive reference for the recruitment of the young mountain dwellers and/or for their massacre and kidnaping; secondly, the members of Boko Haram see the historical empire of Kanem-Borno and the Caliphate of Sokoto as the golden age of the jihadist movement. Thirdly, the occupation of the Mandara Mountains revives the old memories of the servile precolonial past between yesterday’s “preys” and “predators” that call for particular concern.

The question raised by Chetima’s study thus embark on demonstrating that the establishment of Boko Haram in the Mandara Mountains was grafted on the omnipresent realities of violence and the difficult socio-economic situation of the mountain dwellers in particular, starting from early years of 1960, with their forceful migration into the plains organized by the two postcolonial states of Nigeria and Cameroon.